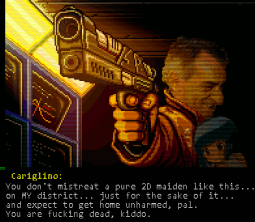 Ok, as a celebration, let's share what software we use everyday and shit, to generate more activity in this forgotten board.
You can also add more categories if you want.

>OS
Windows 7, Arch
>IDE
emacs, Code::Blocks, DJGPP/WATCOM if I need to compile DOS stuff.
>Maintenance
Ccleaner, Deflagger, Speccy
>DAW
pure text-based MML LOL
>Text Editor
Sublime Text 2, Sakura for japanese encoding.
>Internet navigation
Firefox. I use chromium if I need a second option, though.
>Plugins/extensions
μblock, NoScript, https everywhere, rikaichan
>Music Player
Winamp has been my best friend since quite some years now. Simple yet beautiful.
>Torrent
qbittorrent
>Video
MPC with CCCP. UMplayer too.
>Image Manipulation/Drawing
GIMP, XnView, Azpainter, krita is a nice option but needs to be polished a bit more. Looking forward for the next stable version.
>Image Viewing
Honey View
>3D
Blender, Anim8or, Metasequoia
>MIDI
Guitar pro (I used to play guitar and got used to it, so I still use this to edit sometimes), Sekaiju for more stuff like parameters and whatnot.
>Math
Euler. 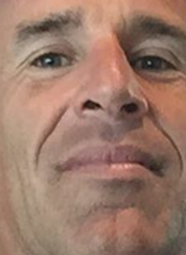 R: 6 / I: 2
Looking for a server for my website and cant find any reputable looking sites ;___; please help 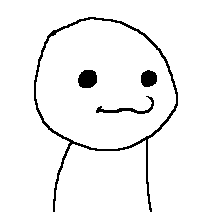 R: 3 / I: 1
So, i got a lot of things to hide, and I was thinking about switching from GNU/Linux to OpenBSD + encryption.

I was about to download it when I faced two options: minimal or minimal + sets.
Is it like GNU/linux netinstall?
Will it download the whole system and let me choose what I do want and what I do not?

Will it also let me choose encryption or is it automatic? 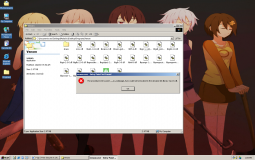 Want to be a full-time contributor?
https://wiki.tox.im/Google_Summer_of_Code

See the rest of the wiki for documentation

Note I am not affiliated with the project in any way 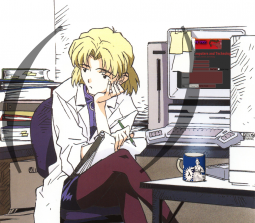 What are you working on, Ubuu? Learning new languages? Having problems?

General programming thread, I guess. Feel free to ask your questions here, or comment about your projects.

If anyone is interested in learning how to code, here are a few tutorials:

And here are some challenges: 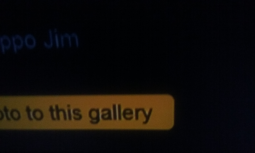 R: 0 / I: 0
II kept getting this odd link on Google:
https://ipv4.google.com/sorry/IndexRedirect?continue=https://www.google.co.uk/search%3Fredir_esc%3D%26client%3Dms-android-samsung%26hl%3Den-GB%26oe%3Dutf-8%26safe%3Dimages%26q%3Dgoogle%26source%3Dandroid-browser-suggest%26qsubts%3D1442963151182%26devloc%3D0&q=CGMSBFatnOMY0L2HsAUiGQDxp4NLmlZQVIV2ZDbMsPHioK7VUAfMIuI
It's weird.
*The image here is unrelated.

Can we get an opsec thread going? It's been an interest of mine lately but I can't find any good material
http://grugq.github.io
was my introduction to opsec. 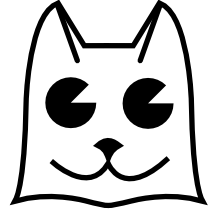 R: 1 / I: 0
Hey, I am developing a new chan engine with the purpose of being more efficient and flexible than the existing options.

Recently I have released the first stable release and I am looking for people willing to stress it.

The live instance I run can be found at http://lynxhub.com and the json api is probably the most vulnerable part of it.

The source code can be found at https://gitlab.com/mrseth/LynxChan . 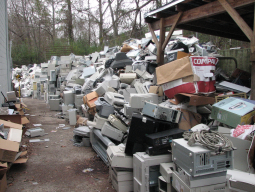 Looking at the sheer lack of activity here (a couple posts every few months), I don't think this topic needs its own board here. This board will now be locked and moved to the annex

R: 12 / I: 6
Hey everyone, I hope this is the right board… I have an important announcement.

There is a new kid on the block. The name is

And, although still in beta, I am inviting you, yes you, to join in. peace out! 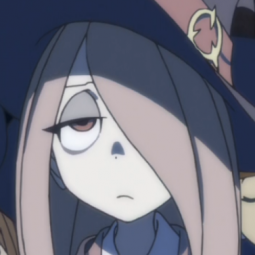 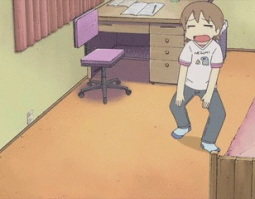 R: 4 / I: 4
Is there a way to change the color of the page in Microsoft OneNote 2010 to something dark? I found the interface's option for page color, but it only lets you pick from a palette of really lightly-tinted colors, which really aren't much better than white. I was wondering if there was an easy way for me to modify the program's files to change the available color palette. If not, is there a similar note-taking program that has an actually useful page color option?

I use OneNote for my dream journal because I like the tab/section feature, and I spend a lot of time writing in MS Word. But after such a long time using dark-themed websites like Uboachan and the 'Tomorrow' color scheme on 4chan, it's become annoying to look at the blinding whiteness that's custom everywhere else. I've realized it's just way easier on my eyes to read light-colored text on a dark background, but very few word processing programs seem to have a feature to facilitate that. 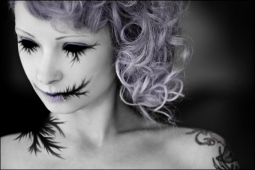 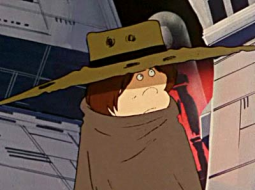 A quesiton about updating OS on a 9 year old computer

So a few days ago, my parents learned that Microsoft will no longer be supporting Windows XP in terms of updates for protection and all that jazz sometime in April.

My dad asked me what they would have to do. Based on what I've read, they (or me or someone else) would have to either update their OS or get a new computer if the computer is unable to support any recent OS.

Is it possible to update to Windows 7 on the computer?

The only concern, other than "What about our files/photos?!", is if it is possible for my family to buy a cheap desktop or the OS for Windows 7 (Other than, you know…). Yes, I know $200 isn't much for most but for my family, that isn't the case. I'll spare the rant and just leave it at that.

Anyhow, I would appreciate any answers.

Don't know if this is the best place for this, but the worst thing has been happening and i have no idea how to fix it.
On both chrome and firefox when ever i try to go to google, it sends me automatically to the https version and it says this page comes up(see picture). It only does this for a few sites, but ones like this or even deviantart work fine.

I have no idea what is happening and i really need this fixed. Please help. 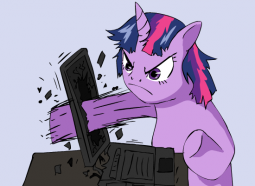 I can usually get rid of them by disabling extensions,but when I go to disable them it says I have none. Someone help me please. 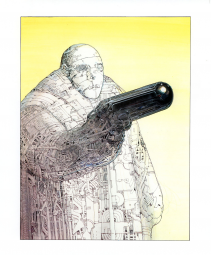 I have always turned off my PC at the end of the day, even switched the PSU off.
What are the benefits if any to leave a PC running in hybernation?
I switch it on the first thing every day anyway.

Maybe it's just me but I've noticed lightbulbs have a longer life if you just leave them on instead of switching them on and off every day.

Sure it might save electricity but how much really? If say a PC is running in hybernation five nights a week alongside a smaller lightbulb.
It's not gonna make that much of a difference in my mind.

But about the PC components, is there some consensus about their longevity and performance regarding sleep/hybernation and switching on/off? 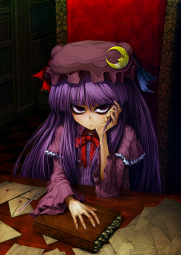 R: 4 / I: 1
What the fuck can I do? Some two months ago I took my grandfather's laptop to fix it. It's really ancient and has serious trouble running XP, so I thought I could install Gentoo. That didn't work because the graphics card is so old it's driver's source isn't compatible with current xorg It could be patched if I studied xorg or C.

So then I tried with Arch so compilation wouldn't be a problem, but grub-mkconfig crashes and now I can boot neither the installation or even the live CD (wtf is wrong with it, suddenly?). Is there anything I can do except for learning C and rewriting the goddamned Xorg along with its drivers? 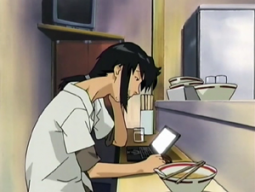 
All I know is I'm on an Acer craptop made for people who think Facebook and YouTube are most of the Internet. 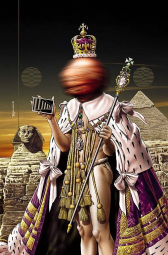 are you guys using any of this stuff?

I'm trying to quit google, they're really weird these days. the meshnet sounds awesome and I hope to get in on that when I have better cashflow. networking has evolved so much since I first got online. even the 802.11g standard is already like ten years old

this PRISM bullshit doesn't seem to be attracting too much attention. I guess it isn't too surprising. it should be shocking… 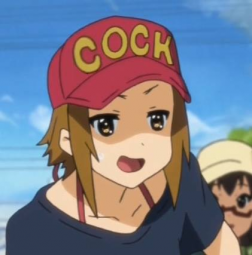 hey /comp/ I know very little about programming and only know html code. I'm supposed to make a program that automatically saves screenshots to a folder and is usable. I only have 2 months to do it. How over my head am I, would it be possible for me to learn enough and do this in the time I have, and what programming language would you reccomend?
Pic unrelated 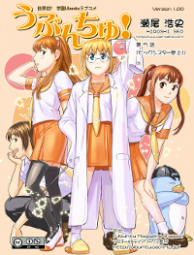 I'd love to move to Linux. All the apps I use on Windows are multiplatform, and have native Linux versions as well. Under Linux, even my crap Radeon HD works like a charm.

Yet I simply can't feel at home on Linux for some reason.

First, I thought it must be the same craptastic font set that comes with almost all distros, and makes my eyes bleed. (Except for Ubuntu, their fonts are beautiful and easy on the eyes, but only in a certain size, which is way too big to look acceptable.)

But no. Even after installing the MS fonts, it's still strange. I still feel like somewhat isolated, and feel like it's just not my place.

What is this? What's going on with me? Why can't I just install Ubuntu (or whatever) and enjoy all the benefits? Why do I have to come back to Windows every time, even if it has shitty drivers, and half of my hardware don't even work correctly with it?

Did any of you ever feel like this when you decided to move from one OS to another? 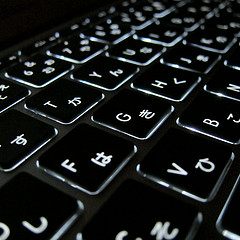 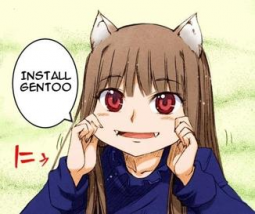 It wasn't as bad as it sounds, although I screwed up a lot, so I've had to recompile kernel a few times. Also grub's notation of partitions was a pain in the ass.

The only minus sides so far (my system isn't complete yet) are the time it takes compiling, my stupidness, and how horrible emerge's output looks. Especially compared to pacman.

Just came to tell you that. 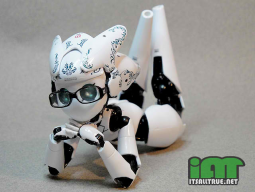 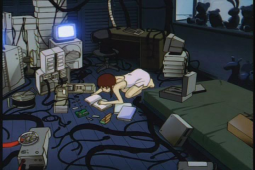 Computers: From OS to hardware and all the good stuff

What would your guys' ideal PC be? What OS would you want? Would you get it customized from your local PC shop or from the internet? What hardware would you want in it? Or would you take the wildcard path and get alienware?

This topic is to discuss what you all out there would want, either a standard desktop style computer or something that you'd think that'd almost resembles a style to Lain's decked out computer. 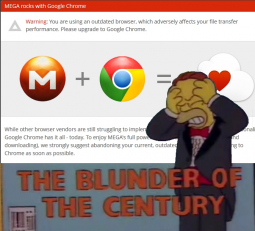 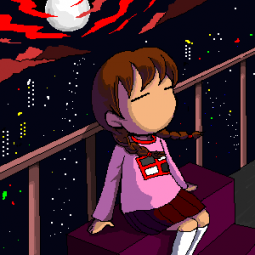 R: 8 / I: 0
So ubuuchons, I might switch over my ancient computer from Windows XP to Linux with the help of my dad, because of Linux's apparent ability to run faster and more effeciently on slower machines. I've never worked with Linux before, so is there anything I should know before doing so? Any tips or tricks to get the most out of it? pls no ricing
This might seem like a dumb thread idea but I'd rather post this here rather than Yahoo Answers or - god forbid - /g/, and my dad has a very bare bones explanation of how Linux works because the last time he worked with it was a very long time ago. Plus I'm just kind of excited to learn more about it because KNOWLEDGE.